We enjoy travelling and we enjoy music. For almost two decades, my wife and I have combined these interests by travelling to different concerts in Europe. Once we are in the city of the concert, we add other experiences. We might visit a few tourist attractions, and we enjoy the daily life of the city.

Sometimes we attend more than one concert in a city, for instance when we visit a jazz festival. And when we go to Lisbon to enjoy fado, we go to different fado houses every night. There are many!

Some years ago, we decided not to travel by air any longer. This means that we now travel by train. We enjoy it very much, and we have the time as we are retired so the fact that travelling from Sweden to our destination might take two or three days is not a problem. However, once having reached the south of Europe, it is practical to combine a couple of concert destinations. This demands some planning, which we also like. The planning and the actual travelling give us the possibility to enjoy the journey twice.

We discovered Joan Chamorro and the Sant Andreu Jazz Band in 2016, and we have enjoyed the band’s music a lot since then. The project is about music education for children and teenagers, where the actual performing is an important part. There are many albums, YouTube videos and live concerts. We have been able to enjoy the big band and smaller constellations of SAJB members and associates live, several times in Scandinavia and in the band’s home base, Barcelona. We have also been able to combine SAJB jazz in Barcelona with fado experiences in Lisbon, another music love of ours, a couple of times. The music flourishes in the two cities, and we have enjoyed both kinds of experiences very much. In 2020, we had planned two journeys to Barcelona and one to Lisbon.

When the pandemic hit the world in the beginning of 2020, everything changed. The most serious consequences of Covid-19 naturally concern public health, but there have also been serious consequences for economies, social life and culture. To stop the spread of the virus, the authorities have imposed restrictions on attending school, working at our normal work places, socialising, shopping, travelling, attending sport and cultural events etc.

The consequences for cultural life have been hard on consumers of culture, but harder still on those who produce culture and earn their living from it. Consumers of music can still enjoy audio and video recordings, which up to a point can compensate for the loss of live concerts, but most musicians nowadays earn their living mainly from performances. Selling albums cannot compensate for this. The loss of performances is also a matter of lost opportunities to communicate with audiences, and thereby sustain and develop cultural skills and expressions.

This article is about the consequences of the pandemic for one specific cultural entity – the Sant Andreu Jazz Band project.

I am not the only one outside Barcelona who has discovered the Sant Andreu Jazz Band. The music is of an amazingly high quality, even if one disregards the musicians’ ages, and the project has some very attractive features in terms of how Joan Chamorro achieves these qualities with the band. Joan aims to educate the young members both as musicians and as people, and the two ambitions turn out to be mutually supportive. Therefore, there are many fans of the SAJB, mainly jazz lovers, all around the world. Before the pandemic, some of them occasionally travelled to live concerts in Barcelona.

The Sant Andreu Jazz Band is a big band playing music from a classical jazz repertoire with lots of swing – sometimes in collaboration with professional musicians. From time to time different SAJB members, former SAJB members and professional musicians collaborate in smaller constellations. These constellations have added some beautiful bossa nova to the SAJB repertoire. (In the photo above you can see a constellation focusing on vocals, La Màgia de la Veu.)

The educative ambition of SAJB and the extensive number of constellations – with Joan Chamorro in the centre of it all – means that we actually should talk about this phenomenon in terms of an extensive and developing project rather than in terms of just a band. I have interviewed Joan Chamorro a couple of times and published a few articles on his work with the SAJB project. (Links below to those articles.)

Joan Chamorro initiated his project, the Sant Andreu Jazz Band, in 2006. This means that the band has been around for fifteen years, and Joan had big plans for the anniversary year, starting already in the end of 2020. What has happened to the Sant Andreu Jazz Band project during the pandemic? Recently I was in contact with Joan by e-mail to hear about the consequences. These were my questions and Joan’s answers.

When did you realize that Covid was going to stop or delay much of what you had planned?

As soon as there was talk about restrictions. Two students came from Italy a few days before the general alarm, and what they told us put us on the alert. Shortly after, the restrictions were announced to last for two weeks, then for another two weeks, and then up to three months. The rest is already known.

Concerts began to be cancelled. We couldn’t rehearse (and we still can’t rehearse the whole orchestra in the jazz house, all together – we do it in sections).

That alone, for me, was already a miracle, as things were. 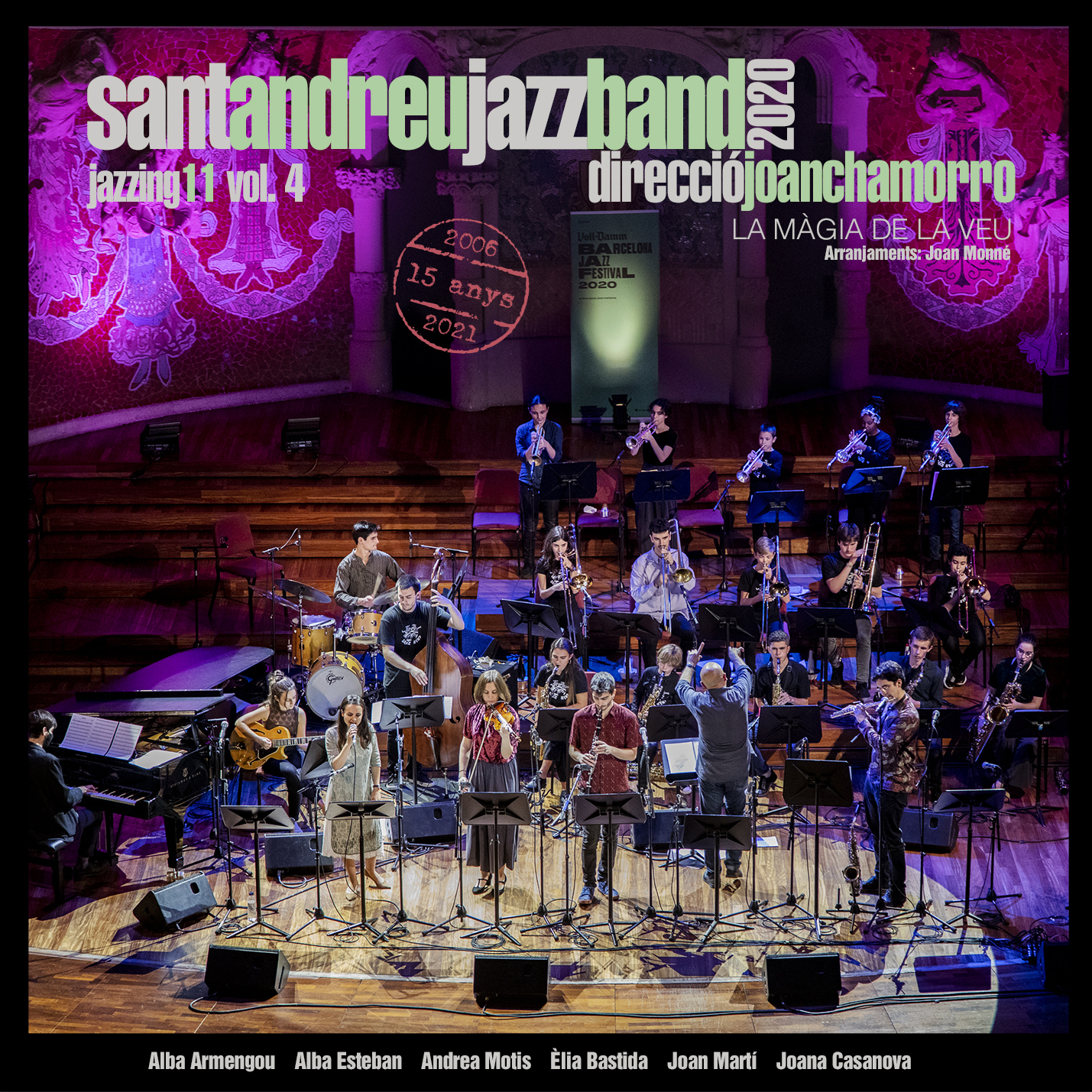 Can you briefly tell me how Covid affected your SAJB activities during 2020 – and your plans for 2021 so far?

There were numerous consequences. As I mentioned, for several months there was no type of rehearsal and some of the classes, especially with the little ones, we carried out through the internet.

Since all this began, band rehearsals are limited to rehearsals section by section.

To prepare for a concert, we have done the general rehearsals in a larger room, kindly provided by the concert hall, one or two days before the concert and also by the Nau Bostik. (Near the Jazz House.)

We had planned to record with Scott Hamilton and I rescheduled the date twice – but in the end it could not be arranged.

Two musicians were due to come from New York, but they couldn’t make it.

The entire Jazzing Festival was left with very few people attending, because obviously, no one came from outside Barcelona. A big band from Mexico was planned to come, but obviously couldn’t. A lot of visitors from outside Spain could not come, etc. etc.

But, well, as I have already mentioned, I am happy to have carried it out. We are already preparing the next. 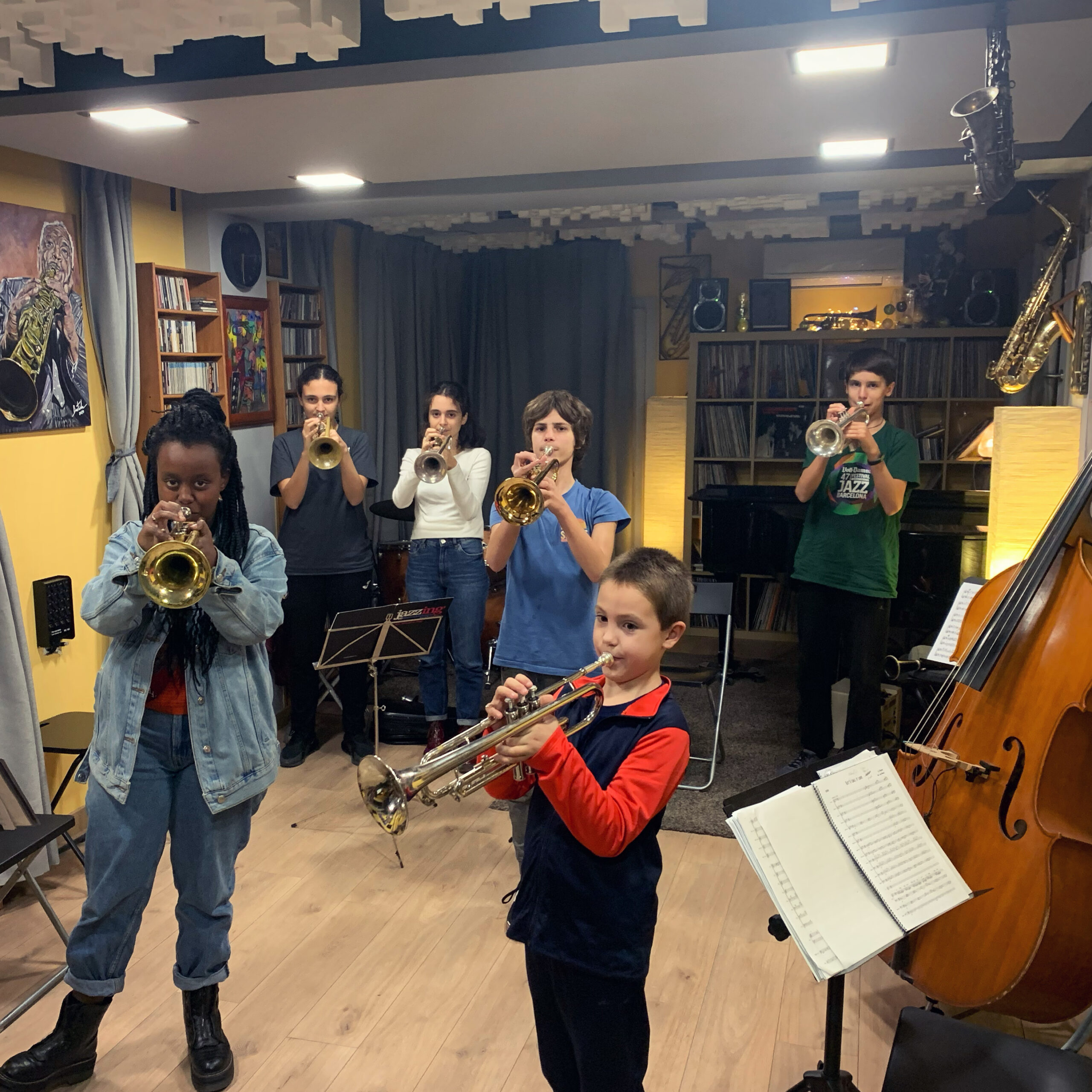 Rehearsing with the new section of trumpets 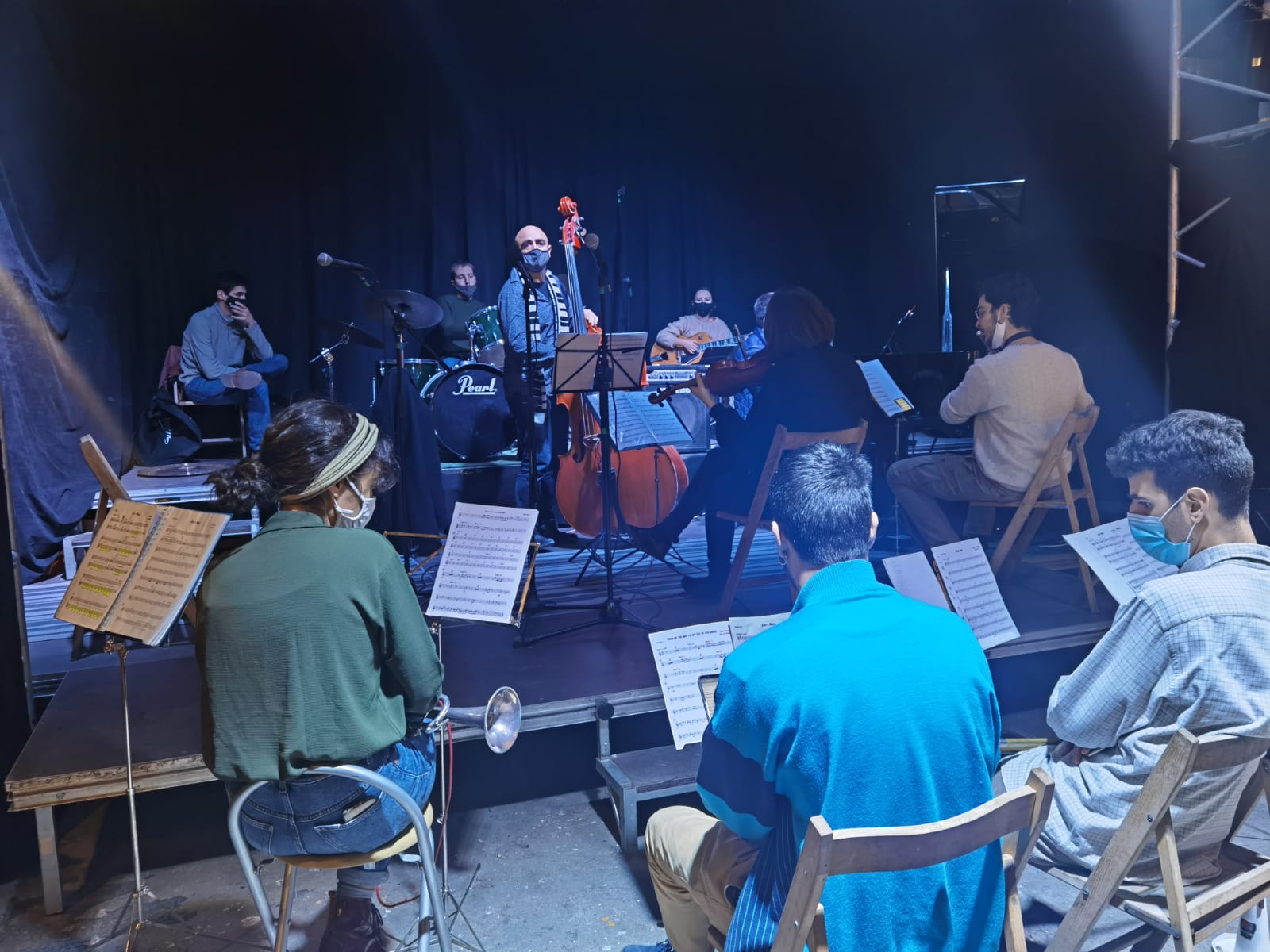 Rehearsing at the Nau Bostik

What have the human consequences been for you as leader of the SAJB, and for members of the SAJB? How have you and the young musicians felt about the situation?

Humanly, it is a very sad situation because you have to stop doing what you are dedicated to – in my case, all that is my life.

But once reality is accepted, we have been able to do important things.

When you work with people that young, close follow-up is important. Rehearsals and concerts generate positive energy and enthusiasm for studying at home and wanting to move forward.

I, for my part, have taken the opportunity to think and organize myself, to clarify my ideas of what I want for my future and, little by little, to make decisions for the future of my project.

On an economic level, for the Sant Andreu Jazz Band, it has been a disaster and, although for the moment we can move on, the situation, if it lasts much longer, will be untenable.

Luckily, concerts are beginning to appear. Concerts are our way of making our dreams come true, and we need them for economic reasons. 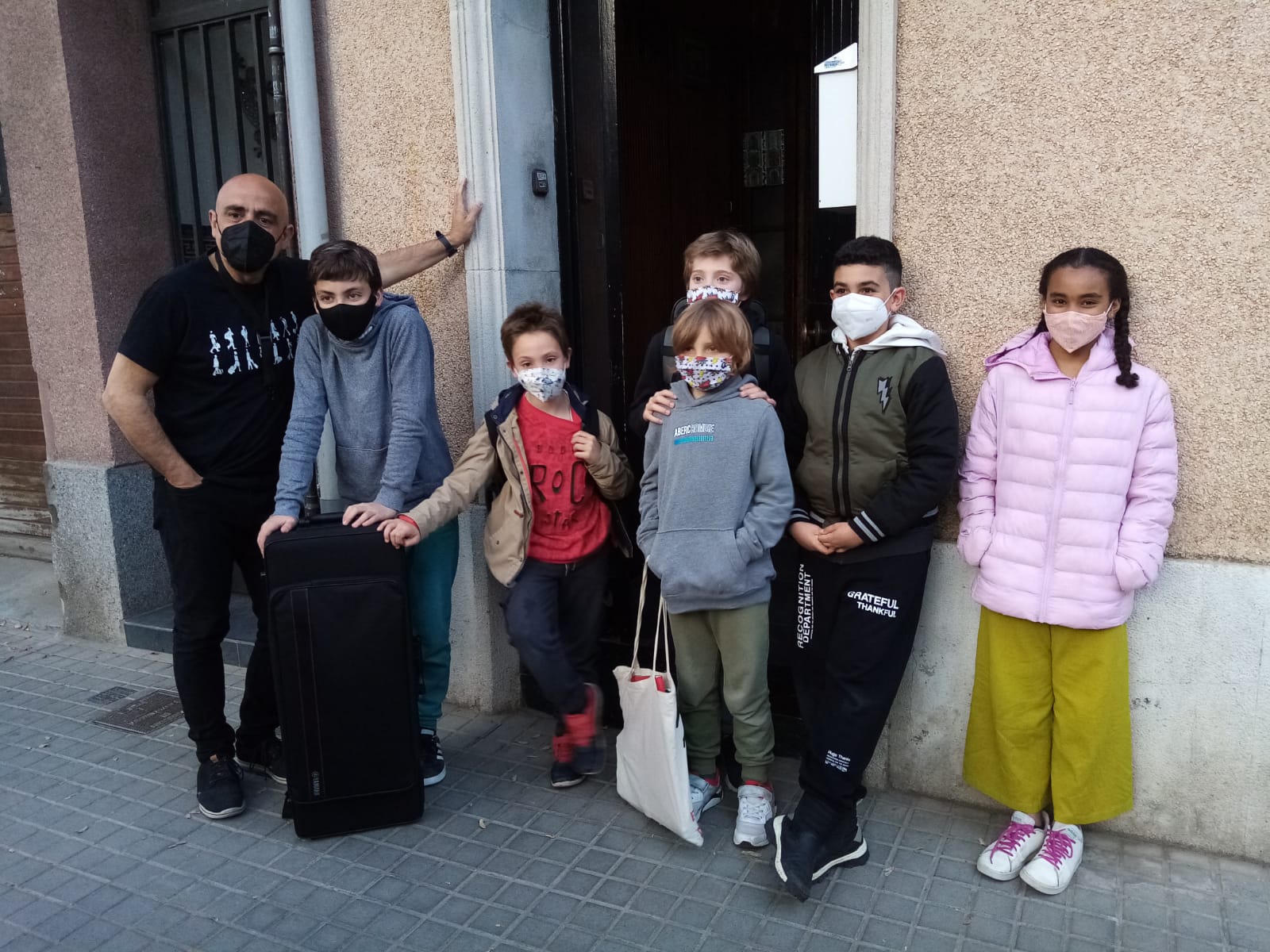 After rehearsal with the little ones at the Jazz House

I am very excited about this new rejuvenated orchestra. Several older musicians left this year (although they continue to collaborate with us), and we have a very good feeling about it all.

The average age of the orchestra has dropped a lot, and that, in part, is good, because it is the present and it is the future.

There are very good students, with great enthusiasm, and that makes me also feel that desire to continue with the work of these past 15 years.

We have several projects for 2021:

Soon the Joan Chamorro presentations of Joan Martí and Marçal Perramon will see the light.

Also the four volumes of Jazzing 11. Only vol 1 will be made a physical album. The other three will be released only on internet portals such as Spotify and Itunes.

And since this is the anniversary year 2021, there will be several important concerts – from our part in the Jazzing Festival in September and onwards.

We will do a concert where I will try to bring together the more than 60 musicians who have passed through the Sant Andreu Jazz Band these 15 years.

I am also going to gather in a concert all those who have their presentation CD and I am gooing to make a big band with them, with new songs. (This will be only for a concert, which I want to record and edit on a new CD).

and take a photo with all the musicians, include it in the book, etc etc etc

As you can see, I am with the same enthusiasm as always and the same desire to continue with the project. Let’s hope things improve and the winds continue to blow in the right direction. 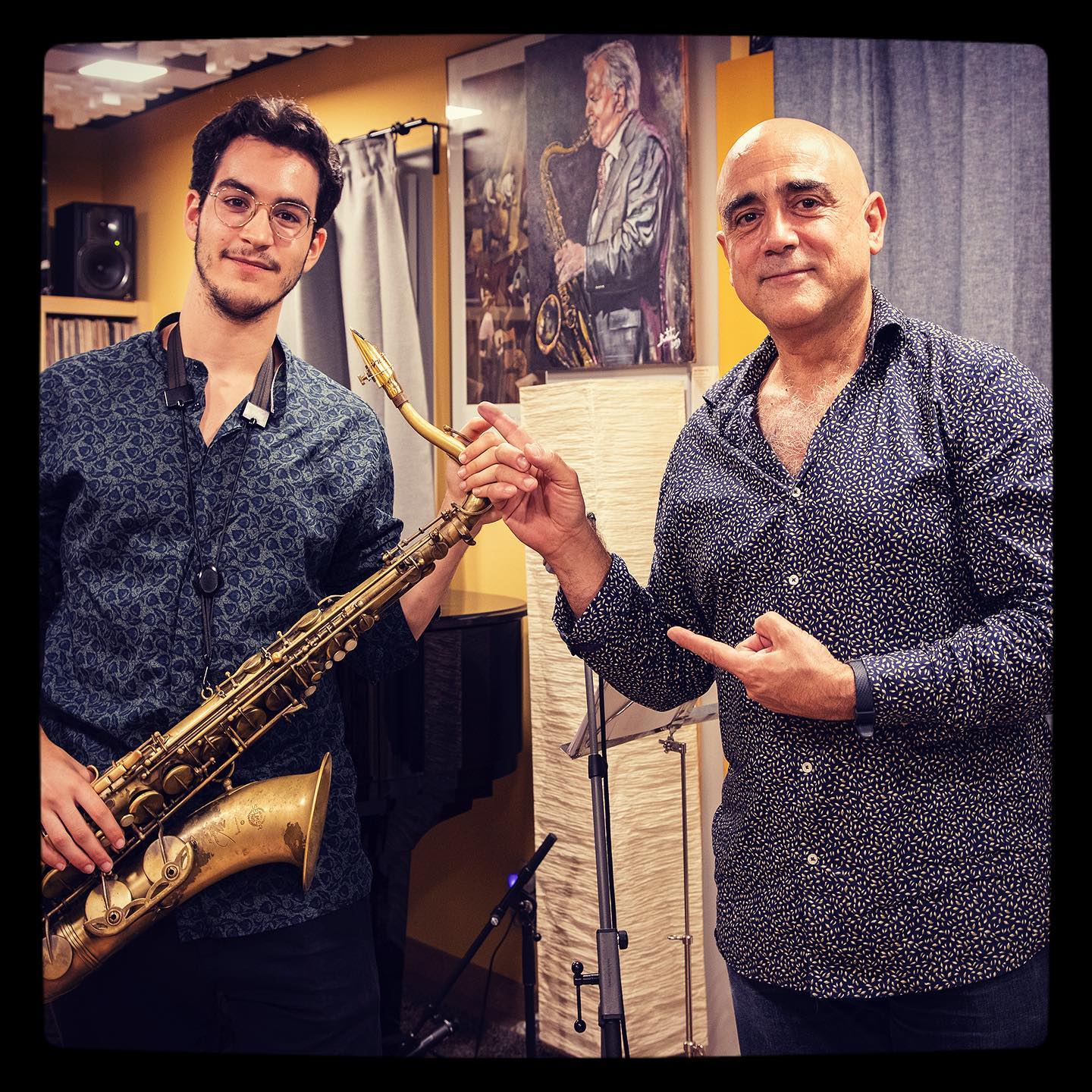 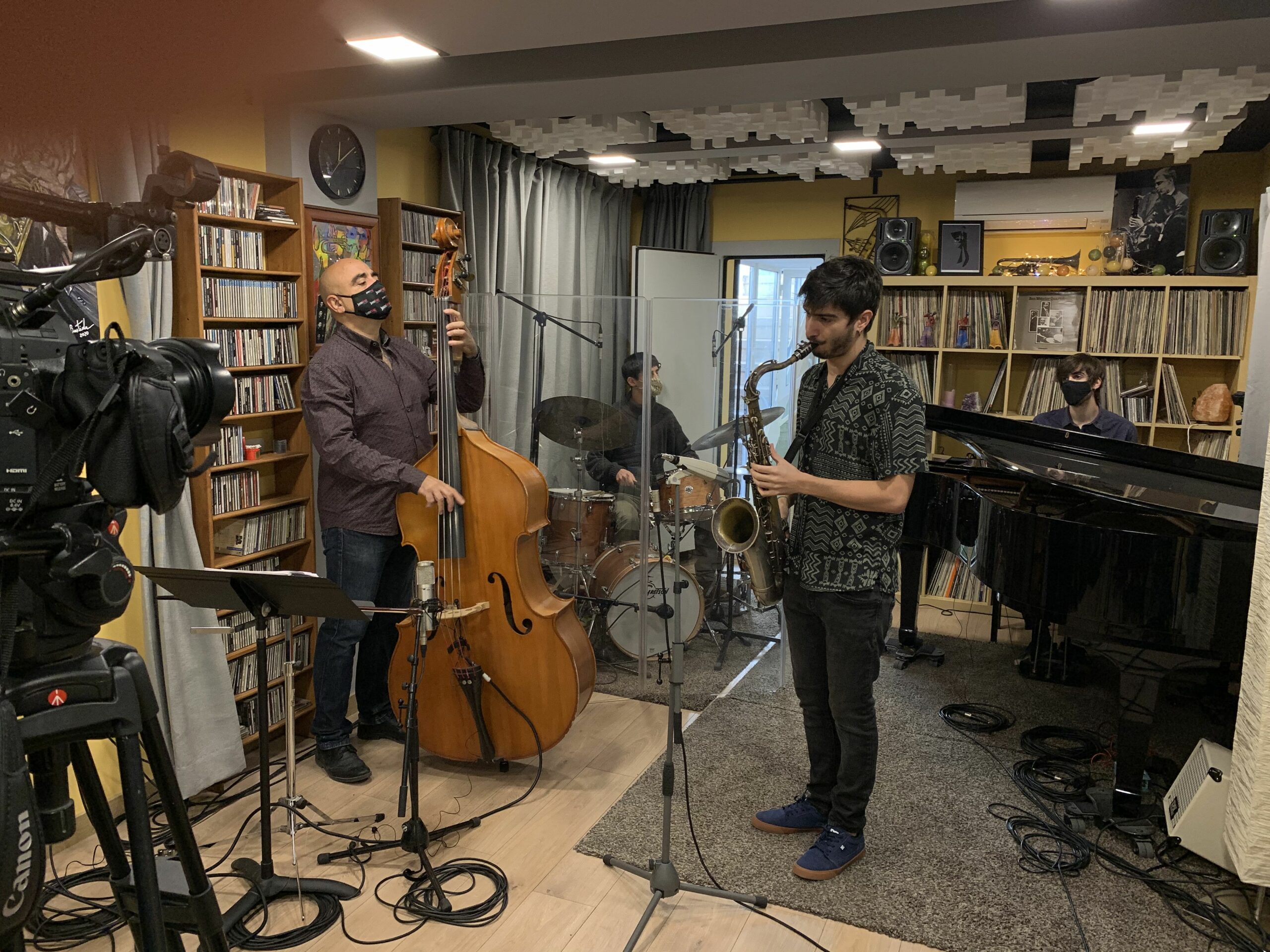 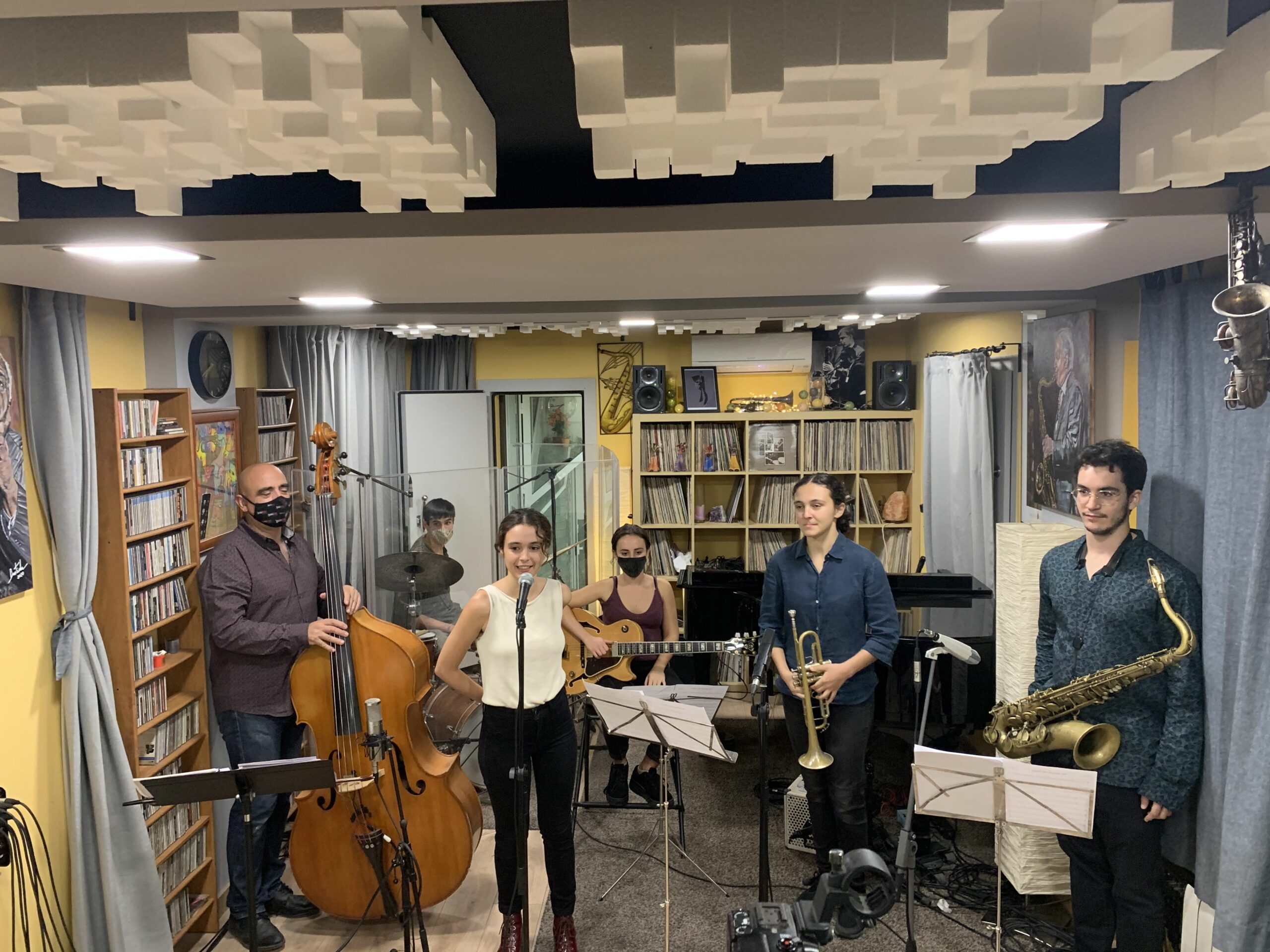 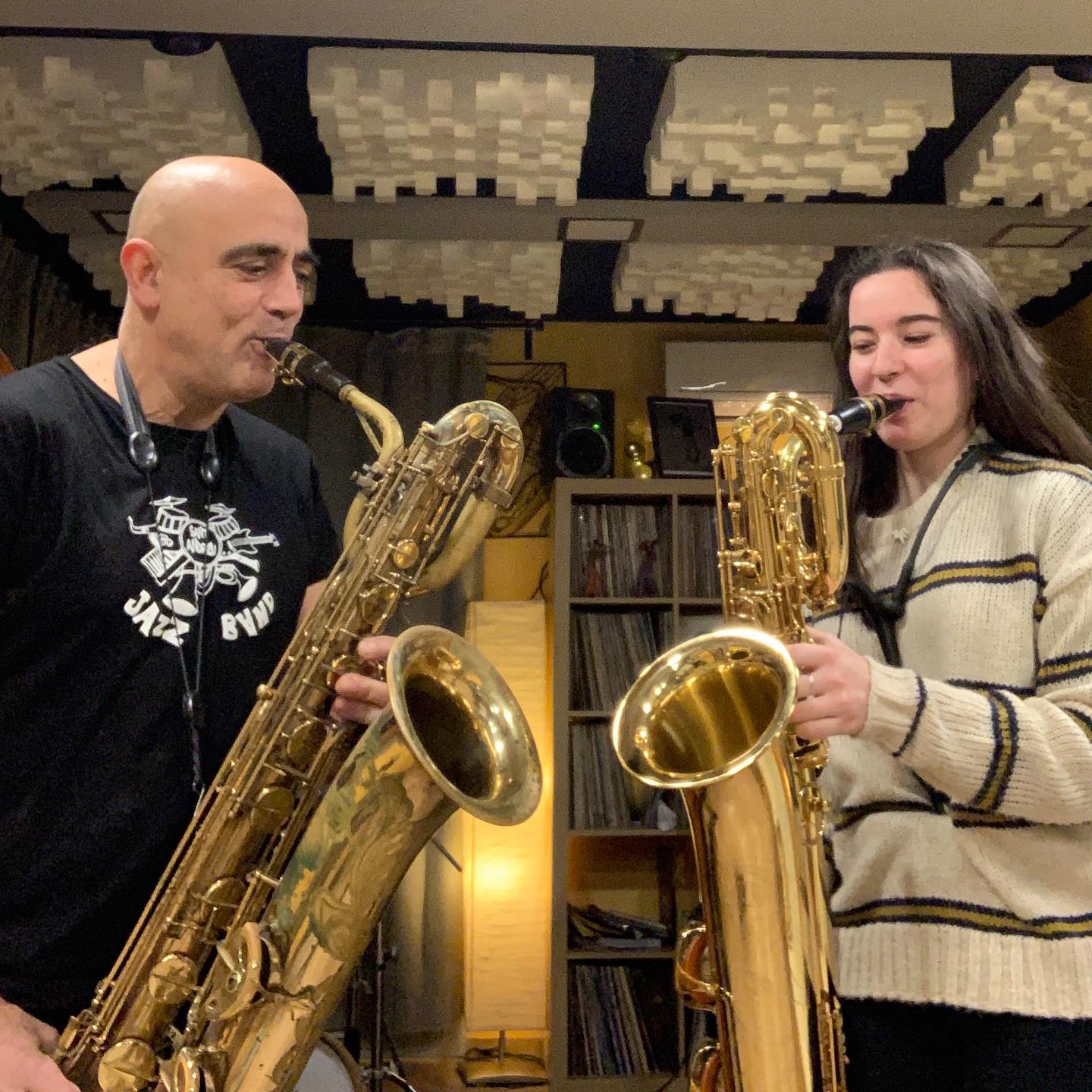 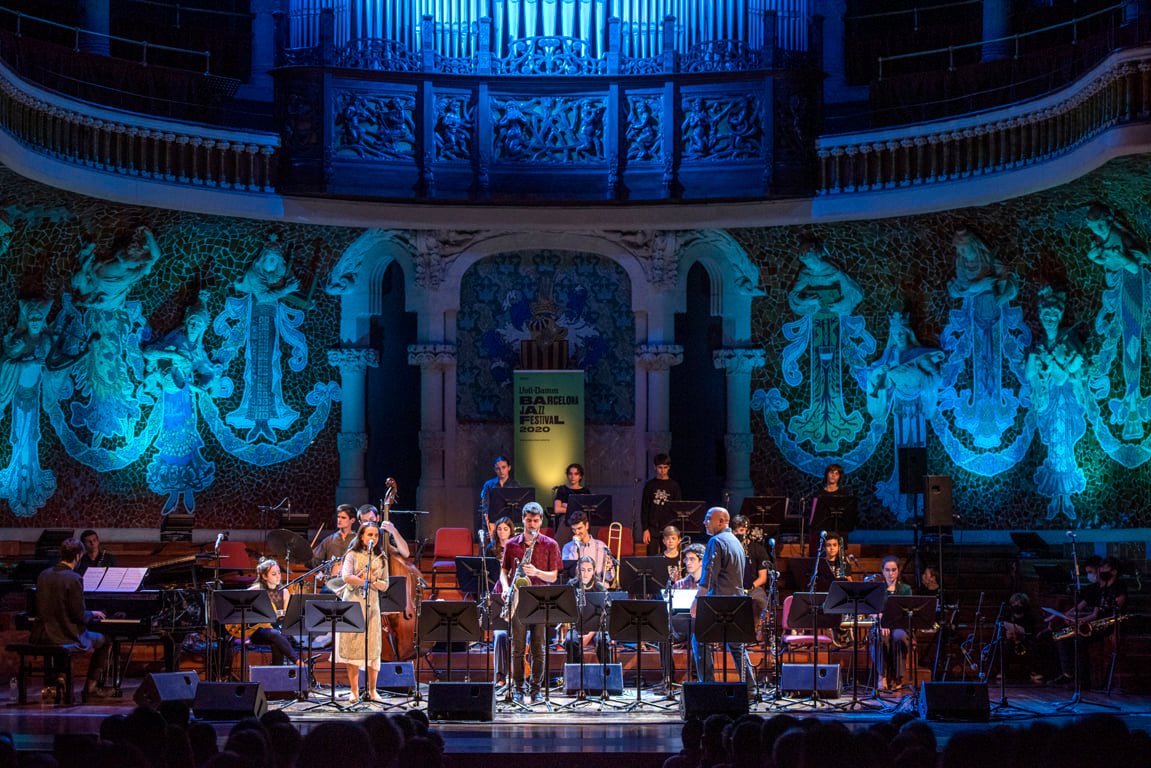 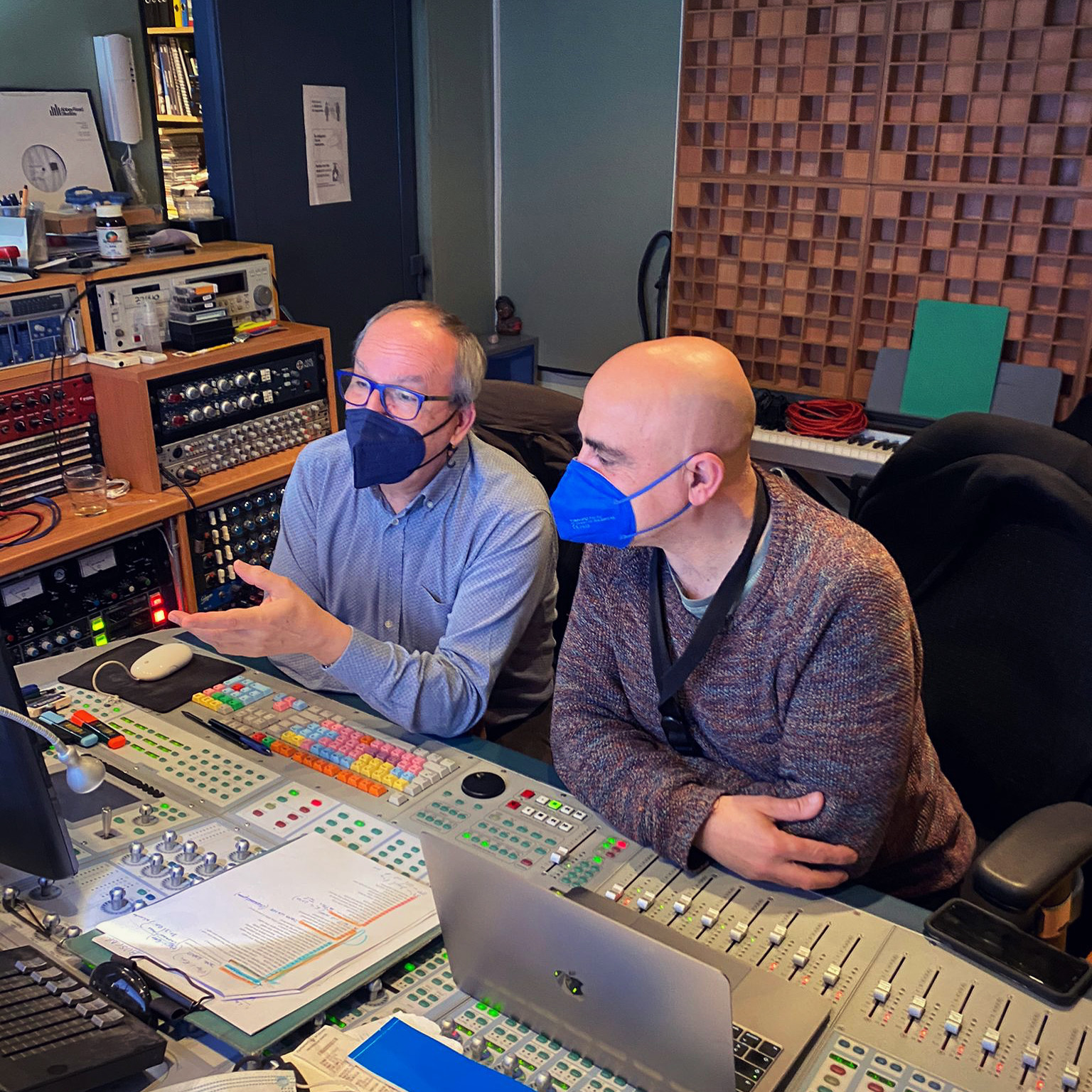 Those were Joan’s answers to my questions. Apart from the economic threat, which is serious, Joan gives us some very positive signals concerning the future of the SAJB project. After more than one year of the pandemic, and all the restrictions related to it, we all need those kinds of positive signals. Joan Chamorro and his SAJB project continue to educate young boys and girls as both musicians and people and, when the vaccination programme hopefully has had its effects, it will again be possible to travel to Barcelona and enjoy live performances by the Sant Andreu Jazz Band and related constellations of musicians. Maybe we will meet there?

A recording in confinement, each from their home

Recordings in the Jazz House, in the middle of the pandemic