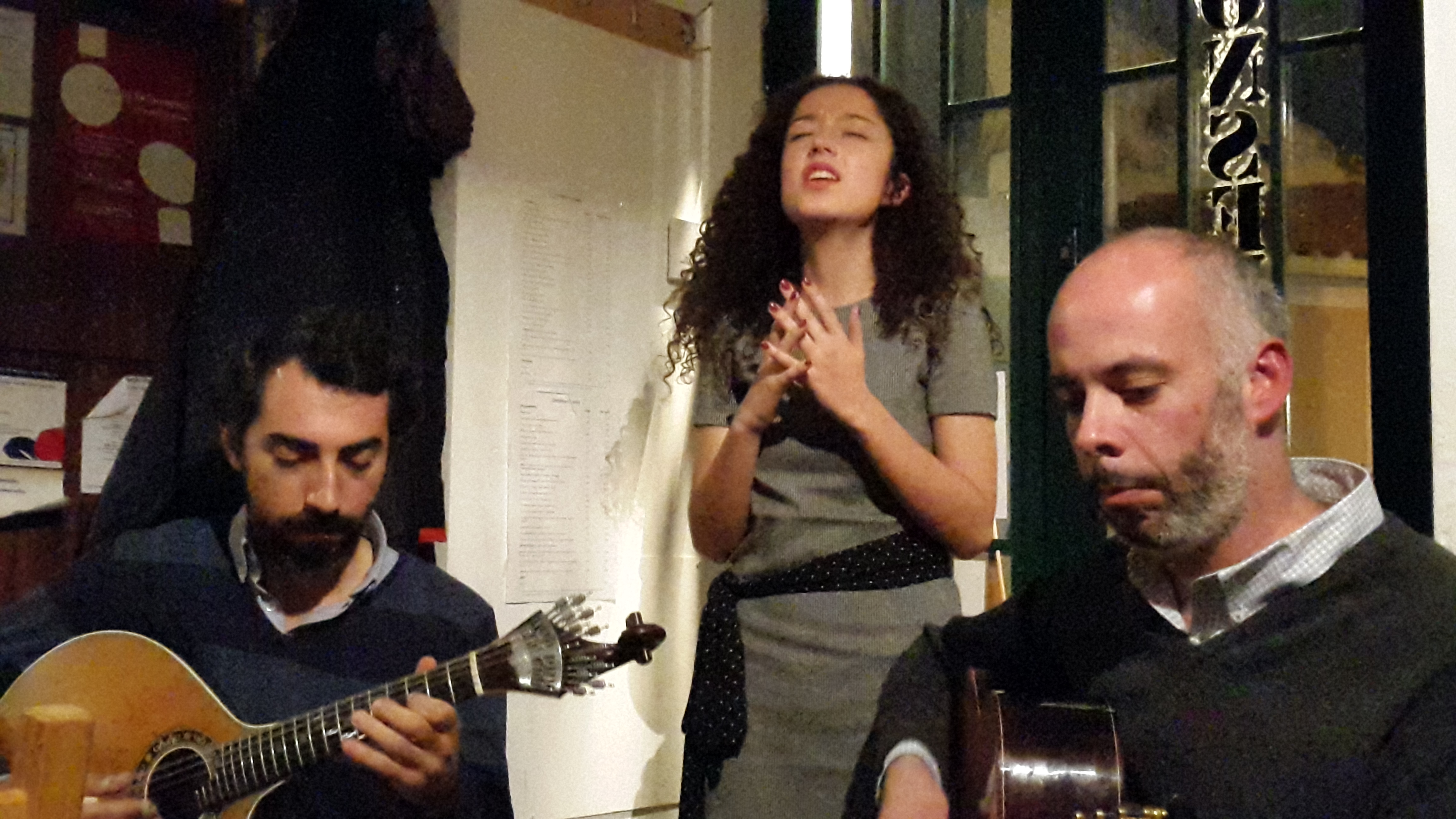 It is the third day of our fado excursion in Lisbon. During the week we visit fado venues every day, and the venue this night is a fairly new one – Conserva-te in the Madragoa area. A Portuguese friend living in Sweden has advised us to go there, and she has even helped us to book a table. We take a bus from our hotel, and the last ten minutes we walk. Compared to the busy streets of Lisbon it is a big contrast to come to this neighbourhood. The small streets we walk to come to Conserva-te are almost empty. But with the help of GPS it is easy to find the place.

We step into the small restaurant and are welcomed by a young man at the door. We tell him our name and that we have a reservation. He obviously has already guessed who we are, and he introduces himself. “I am Domingos.” Our friend has told us that Domingos is the owner of the place and that he also plays the Portuguese guitar.

We are invited to our table and we order a menu with lots of small dishes and red wine. This means that we leave all other decisions to the staff. It proves to be a very wise decision. Although not expensive the wine is nice, and small very nice dishes keep coming to our table during the night. Domingos tells us that Conserva-te is built around the concept of music, food and drinks emanating from the Portuguese speaking parts of the world. The language that unites these countries has given way to mutual exchange of cultural expressions, and this is what Domingos wants to acknowledge and promote in music, food and drinks. 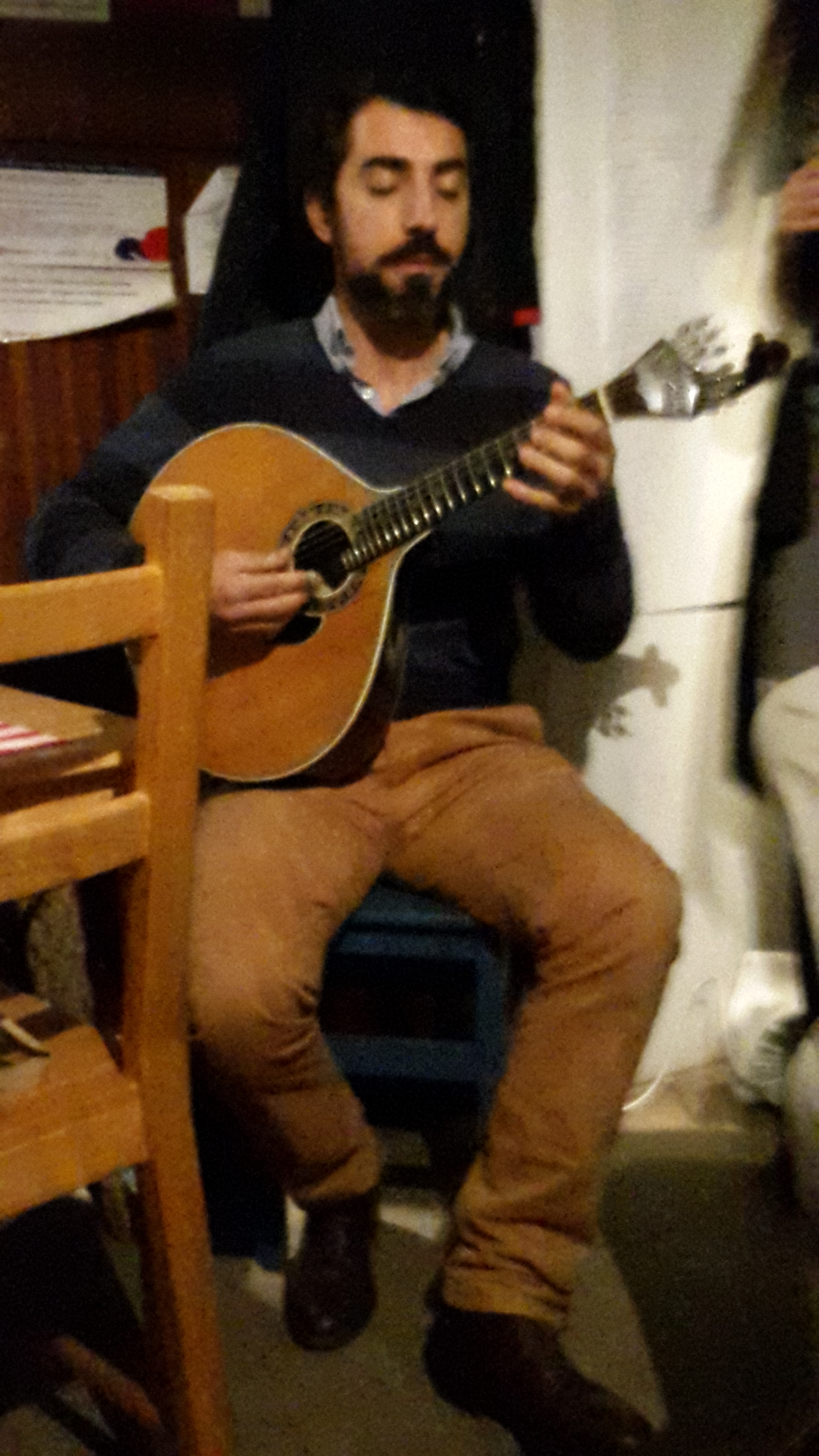 In terms of music this means that the guests at Conserva-te of course can enjoy the Portuguese fado, but also for instance Cap Verdean Morna or Brazilian Bossa Nova. What you will hear when you visit Conserva-te depends on the performing musicians that particular night. The night we visit Conserva-te is dedicated solely to Fado.

Domingos is passionate about his idea, and he would like to create new places built on the same concept as the original Conserva-te. He talks in an entrepreneurial way, but his entrepreneurial drive is not about earning money regardless of business. His passion rests with the idea of Conserva-te.

As a young man Domingos studied to become an engineer, and he was employed as one for some years. But he was also a good guitar player, and when labour market was troublesome he decided to go for music and his idea about promoting the cultural expressions from the Portuguese speaking parts of the world. It is not uncommon that fado musicians start their own fado restaurant, and Domingos is a musician in this tradition. However, it might be that it is not as common nowadays that it used to be.

Domingos speaking so passionately about developing his idea makes me ask if he rather wants to be a business manager than a musician. But Domingos does not want to choose between the two, and I hope that he will not have to. Domingos plays the Portuguese guitar very well, and his passion for the Conserva-te concept deserves success.

Domingos’ concept makes me remember how I myself found the Portuguese fado. I wanted to get to know Brazilian music better and, as I often do, I used the associative serendipity of the search engines of Internet to find my way to new musicians. And at one point the Internet, sensitive to cultural connections, forwarded me to a Portuguese fado song. I was intrigued by the beautiful melody, the concentrated and strong expression of the fadista – and the beautiful guitars. From that start I have made fado an important part of my music listening. So Brazil is actually the cause for us being in Lisbon, and tonight at Domingos’ place.

What about the fado then? We have heard from the well informed fado guide who travels with us that tonight’s fadista Joana Almeida is a very good one, although only 19 years old. After a while we see a very young woman step into Conserva-te, and we conclude from her youthful apperance and the way she is dressed that it must be her. It takes some time before it’s time for the first performance, and we see her sitting at the back of the small restaurant fingering her mobile. She appears so very young. Can she really sing fado in the mature way that we believe is important to the fado expression?

And then it is time. Domingos Mira, Joana Almeida and João Vinhas place themselves in the only free space that is large enough for the three of them to perform in – a couple of square meters right in front of, and very close to, the entrance door. Domingos makes sure that no one is about to enter before they start. 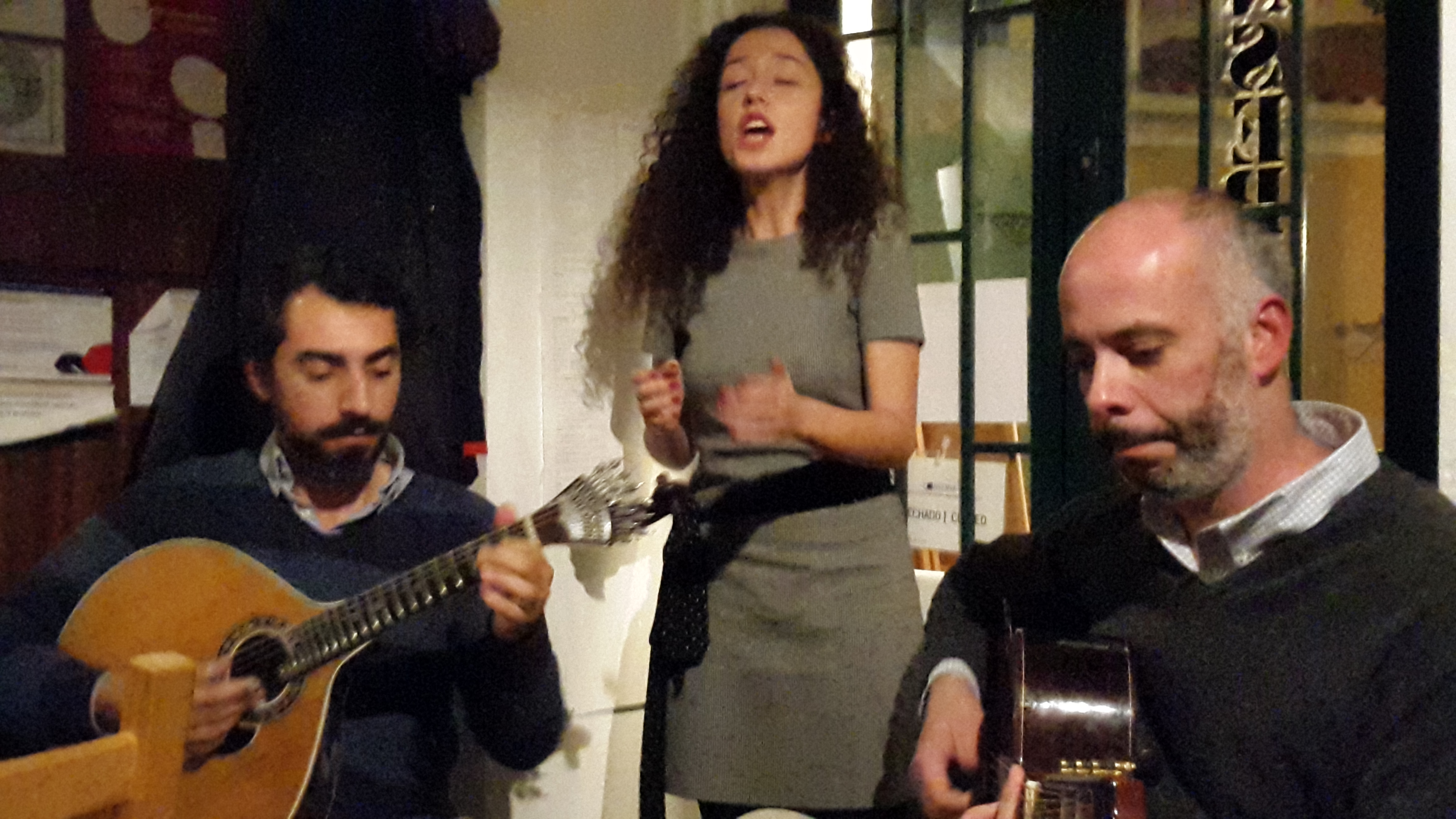 Domingos and João starts with a beautiful traditional guitar introduction, and then it is Joana. And from one second to another there is an astonishing transformation of her character. She closes her eyes, straightens her body and concentrates – and then she sings fado strong and beautifully. She now radiates maturity and confidence.

During the night Joana performs four times. There is no other fadista, which to us is unusual. But our impression of Joana does not change, and we have no wish for another fadista to perform. Joana’s singing is of high quality through all performances and songs.

What happened when Joana started to sing? Did the melancholic fado lend her maturity while she was singing? Or did the fado make me interpret the singing Joana as a more mature woman than she really is? Or, vice versa, was I maybe misinterpreting her youth before she started to sing? Is she really so young in mind that I concluded from her appearance before the performance?

Whatever the explanation, the combination of Joana Almeida and fado is beautiful. I feel privileged to have the possibility to see this young fadista develop in the years to come.

And unfortunately I will have to wait until I can enjoy her singing again. She has so far not recorded a CD of her own, and I have not been able to find any video recordings that do her justice. So there are no YouTube links in this post. But obviously there must be some nice YouTube videos with Joana soon. When I find them I will update this blog post with those YouTube links and also post them on Musik.pm on Facebook.

But you who live in or visit Lisbon can of course enjoy Joana performing live. One very nice place to do that is at Domingos’ place, Conserva-te.

Two years later, I keep my promise! Here is “Vem Ver A Lua”.