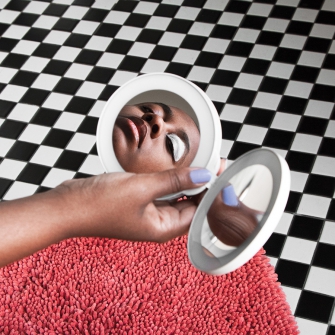 Cover image of Dreams and Daggers

I found Cécile McLorin Salvant on YouTube in December 2014, and realized that this was a new jazz singer out of the ordinary. Well, she was new to me, but she had by the time already received much appreciation in jazz circles. Some three years later she has received two Grammy awards – the last one yesterday for her latest album, Dreams and Daggers.

Cécile McLorin Salvant was born in 1989 in Miami by a French mother and a Haitian father. She took piano lessons early in life, and eventually also singing lessons. After high school, she moved to Aix-en-Provence in France to study law, but also classical song. There she met with the teacher and reedist Jean-François Bonnel, who introduced her to improvisation and vocal jazz. She started to sing with bands, and in 2009 Cécile and Bonnel´s Quintet recorded the album Cécile and the Jean-François Bonnel Paris Quintet.

Back in the US, Cécile 2010 won the Thelonious Monk International Jazz Competition in Washington D.C. Later the same year she released her first own album, titled Cécile. In the fall of 2012 she recorded the album WomanChild together with pianist Aaron Diehl, Rodney Whitaker, Herlin Riley and James Chirillo. The album, released the following year, contains an unusual song material. In addition to original songs, it consists of a number of rarely played songs from the older jazz and blues repertoire. The album was very well received, and Cécile was compared to several of the really big female jazz vocalists. (See, for example, the cited review in the image above.) So I should have known about Cécile.

Her next album, For One to Love, was released in 2016, and for that she received her first Grammy award. And now we are at present date. Yesterday her latest album, Dreams and Daggers, was awarded with her second Grammy.

It should be noted that Cécile has continued her very successful collaboration with pianist Aaron Diehl. Diehl’s trio with Paul Sikivie on double bass and Lawrence Leathers on drums is a perfect match with Cécile. She also sings with other bands, but this is the combination I love the most.

So, a lot of people love the way Cécile McLorin Salvant sings jazz. I am sure many of you also do. Well, what is it about Cécile’s singing that makes me so much appreciate it? I believe it primarily is the natural, personal and self-confident way she interprets the songs. This applies both to the musical and to the dramatic side of her interpretations. She is a remarkable singer, but she also knows how to make theatre out of the songs – without losing sight of the fact that it still is music she is executing. Sometimes it’s comedy, sometimes it’s tragedy, but always very personal. Cécile’s interpretation skills indicate a remarkable measure of artistic maturity.

Despite these qualities, Cécile is only 28 years old. (She becomes 29 in August.) She has made an impressive musical journey before she turns thirty. WomanChild was recorded in the year she became 23, For One to Love came 2016 (the year she became 27) and Dreams and Daggers was released last year. And along with several other rewards and honors she has earned two Grammy awards.

I was fortunate to enjoy Cécile perform in a small club in Oslo May 2015, and as soon as she returns to Scandinavia I will see her again. Probably then in a big concert hall. When your favourites become famous you need to share them with many more music lovers.

In January 2015 I published a post (in Swedish) about Cécile on Musik.pm, including links to some very nice video recordings. Waiting to see her live in the part of the world where you live, you can enjoy those music videos and some more here.

I Wish I Could Shimmy Like My Sister Kate

I Didn’t Know What Time It Was

You’ve Got to Give Me Some

You’re Getting to Be a Habit with Me