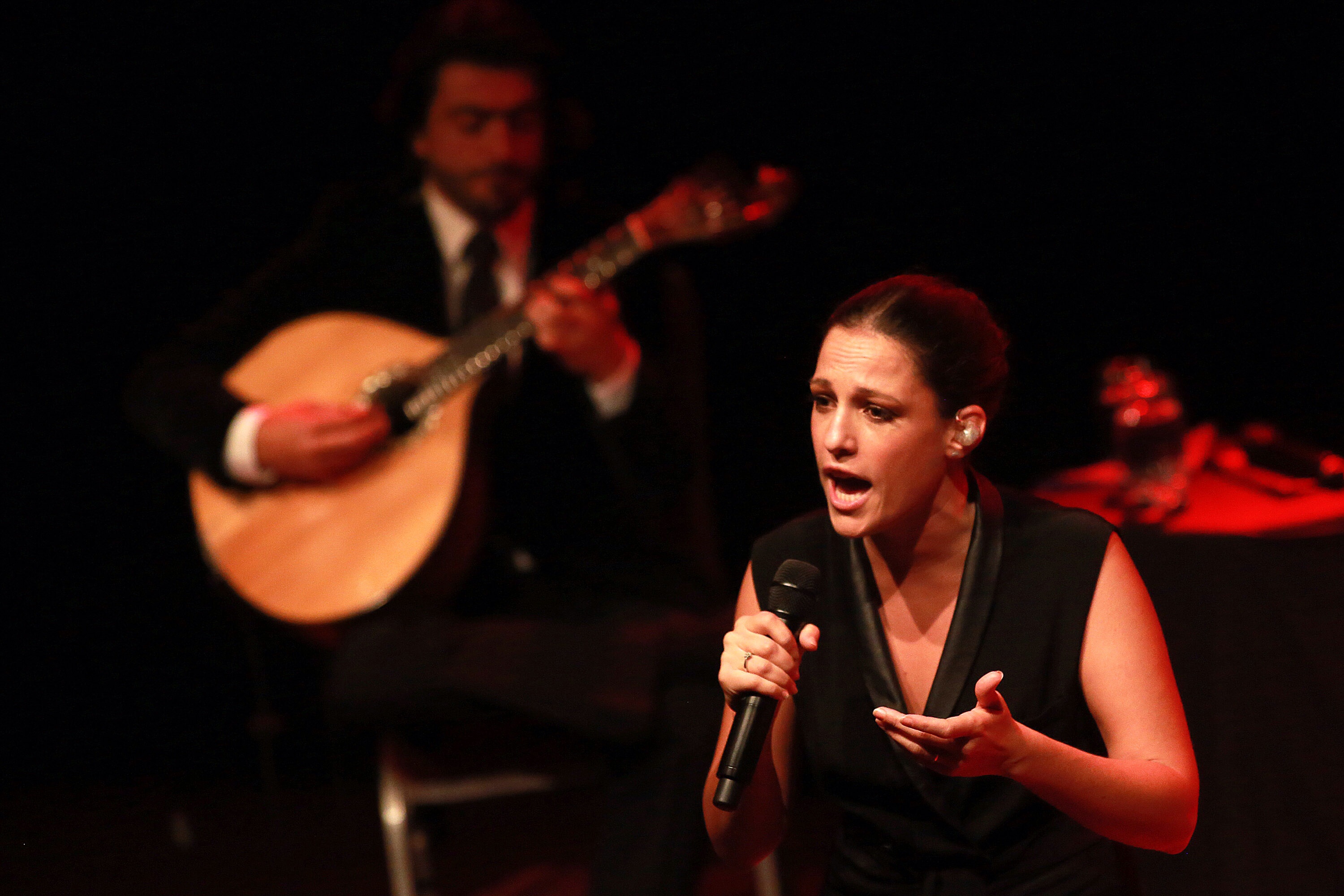 Maria do Carmo Carvalho Rebelo de Andrade was born in Lisbon in 1984. As a child and teenager she spent lots of time in her mother’s fado house, listening to and learning from her mother and other fadistas and guitaristas who performed there. Eventually Carmo started to sing fado herself, and now she is one of maybe four fadistas who usually are mentioned in discussions on who the best female fadista is today. Many see her as the most interesting interpreter in the new generation of fadistas. Carmo is better known as “Carminho” and her mother is Teresa Siqueira.

Carminho’s first solo album Fado was released 2009, and was a huge success. Since then she has released two more albums with a base in fado – Alma (2012) and Canto (2014). Carminho is of course famous in Portugal, but she has also conquered the fado loving part of the world. However, she has over the years also tried other genres, and she is often referred to as a “crossover artist”. In the world of fado, where tradition is important, this is not always looked upon with approval.

Other renowned fadistas have tried to sing jazz and other genres, but it has not always been a successful venture. Often they cannot compete in terms of a pure genre expression and they do not find a fruitful way to utilize their fado character in other genres. Some singers are from the beginning in between genres, which means that they do not have a strong fado expression in the first place.

Carminho is unique in this respect. She has in my view a very strong fado expression and she interprets the traditional fado songs as a true fadista. You can experience this in some of the music videos below. But Carminho can also sing in other genres in a beautiful way. She knows how to use her fado expression within those other genres, and she thereby creates something unique and completely new – like on her latest album with music by Antônio Carlos Jobim. (Carminho Canta Tom Jobim, 2016) Her expressive and modelling way of singing, strong and yet gentle as the long waves of the ocean, rests in a beautiful way in the light Brazilian accompaniment by Banda Nova. Three out of the four members were once members of the original Banda Nova which played with Tom Jobim. It doesn’t get any better than this. It is just beautiful!

Another example of Carminho’s singing within other genres is her collaboration with Brazilian Marisa Monte. Marisa Monte is also a beautiful singer, but two beautiful singers do not guarantee that the combined expression will be beautiful. Duets can be problematic. But the voices and expressions of Carminho and Marisa form a very nice combination, and you can sense that they also have a good time together. Among the music videos below there are a few duets with Carminho and Marisa Monte. Unfortunately, in two of these the technical quality of the recordings is poor. However, I want to include those anyway since they illustrate the beauty of meetings between the Portuguese and Brazilian music cultures. Carminho and Marisa interpret in turns the fado song Saudades do Brasil em Portugal and the Brazilian Dança da Solidão (Desilusão) with their own cultural music accents.

Of course I hope that Carminho will continue to sing fado with her beautiful and strong fado expression – sincere, emotional and with “sand in her voice” as a Portuguese friend of mine put it. But I am also very expectant to everything that Carminho can do in the future within other genres. So far she has been spot on in whatever she has tried. Her voice and expression lend themselves easily to different styles, but her fado voice is always present as a base and essential ingredient.

I am not Portuguese, but as many I have come to love fado in spite of that fact. I do not even understand the Portuguese language, but I do understand that the poems of fado are important. I have to rely on the fact that the fadistas understand what they are singing about, and that their understanding colours their expression. The expression is the way to my emotional understanding and appreciation of fado. What is said above about the fado expression should be interpreted from this fact. Carminho communicates strongly with my emotions.

The videos below show emotions of pain and joy, musical friendship and professionality. Carminho’s expression, musicality and slightly hoarse fado voice alongside with her beautiful companion musicians make her music irresistible.