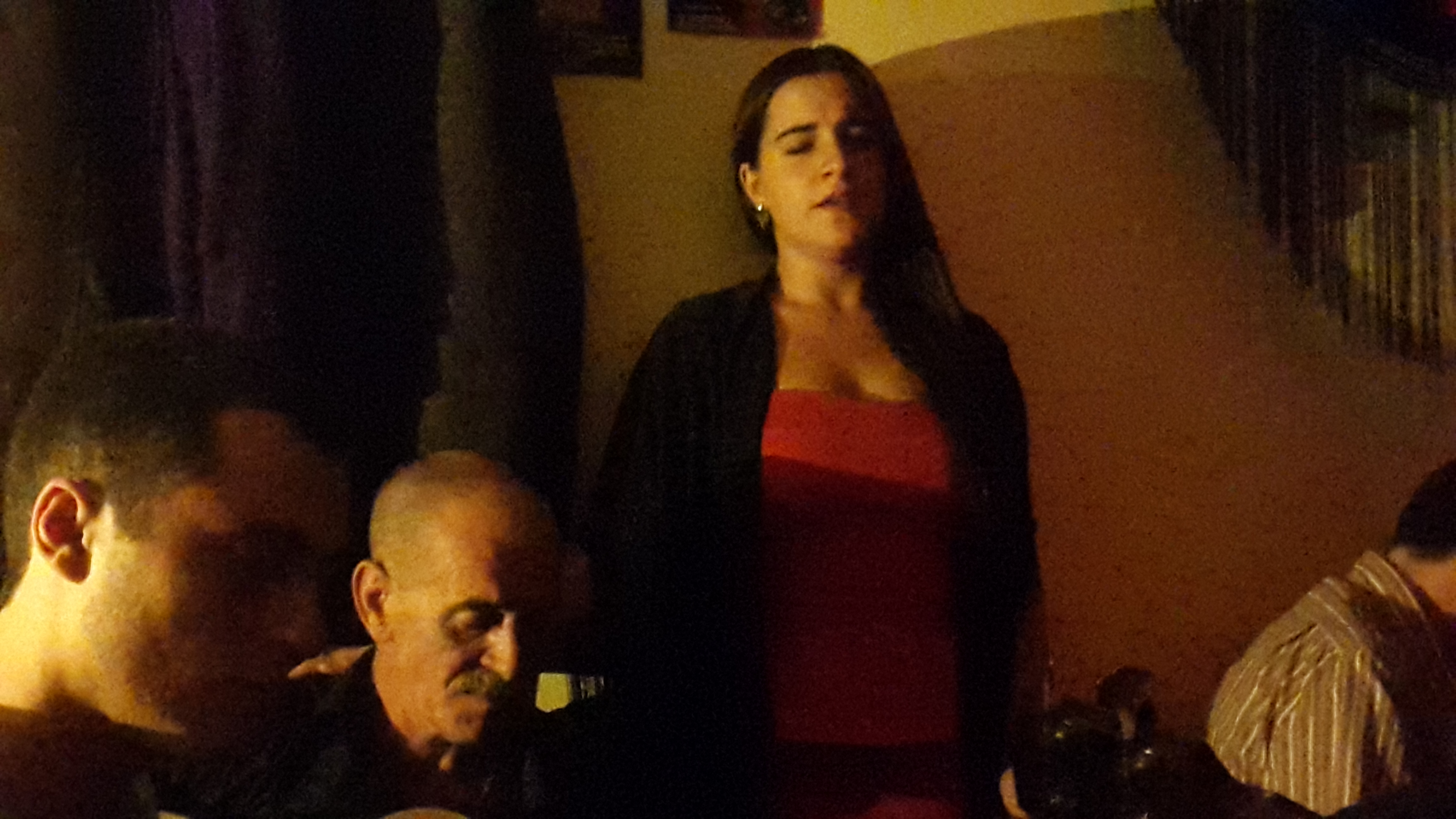 It is the 24th of October. We arrive at the old Grande Hotel de Paris in the centre of Porto after a flight from Sweden, a train ride from Lisbon Airport and a taxi drive from Campanha train station. It is our first visit in Portugal, and we have come to experience Fado – a new love in music since three years. After checking in I send a message to the Porto fadista who became a Facebook friend only two weeks ago. I tell her that we now are in Porto. I am lucky. Within seconds I can see her start to write an answer. It’s magic! She wishes us welcome and asks how long we will stay. I give her the answer – only a couple of days. A minute later we have received her recommendations of two Fado houses in Porto. The adventure starts.

The next night we go to Casa da Marinquinhas, the Fado house that the fadista recommended in the first place.  It is not easy to find the place among the irregular small streets and alleys alongside central Porto. The houses are very old and there are not many people in the sparsely-lit streets. If we had not been recommended to go there we would probably had avoided that part of the city at night time. But once there we are warmly welcomed and invited to our booked table.

After four hours we have had a nice meal interfolded by at least six performances by different fadistas, male and female, and two guitarristas. The man who seems to run the place is strict in his design of the Fado experience. Food is ordered and served in sequences to fit in between the performances. Before every performance the lights in the small restaurant go down and only a couple of tiny spotlights light up a small spot in the centre of the place. There is no stage. The musicians are on the same level as us. It is totally quiet. No one continues to eat, and we are all focused on what is going to happen.

And then one of the most beautiful combinations of instruments – the Portuguese and the classical guitar – starts to colour the background of the Fado song. Soft, but nevertheless energetic. They do so with a delicate fabric of tones in which it is sometimes difficult to distinguish who is contributing which thread. Still, the different sounds of the two guitars are very distinct.

After a short and beautiful guitar introduction, often with a bittersweet colour, the fadista starts to sing. And the song is not less beautiful. The fadista tells the emotional story (most often a sad one) with closed eyes, and he/she does not open them until a storm of applause releases the tension of the fadista and the audience. There is never a second of silence between the song and the applause. It is as if the concentration of the strong emotions that the fadista and the musicians create gets its release when the last almost forceful tones of the guitars and the fadista are hit.

As the experienced visitor of Fado houses now realizes, this is not a description of what is going on only in Casa da Marinquinhas, but with variations in every Fado house. At its best the Fado experience is created in a close relation between fadistas, guitarristas and Fado house guests. Fadistas sometimes say that they need the community with the audience to create genuine and honest Fado. Guests are sometimes informed that “you and your silence are important parts of the Fado experience”.  This message has two parts. It means that the guests of Fado houses are co-creators of the Fado experience – but also that the guests cannot be co-creators if they disturb the fadistas, themselves or other guests by talking, eating or just being focused on something else than the performance. Fado is serious business, and if you are not interested in participating on these terms you should probably do something else. It might sound a little bit too strict to some of you, but why not give it a try? You will be rewarded.

However, in the genre Fado Canção the fadista sometimes invites the guests to sing along. This is a special kind of Fado with verse and refrain, and the Fado house guests can be invited to gently join the fadista in the refrain. But make no mistake – it is the fadista who is in command.

What about us who do not speak or understand Portuguese? Can we participate on those terms? I think we can. We might not understand the story that is told, but communication has more channels than language. The expressions of Fado communicate strong emotions, and the beauty of the melodies, the voices and the instruments strongly relate to our emotions. For me it is enough if the singer understands the lyrics and that this understanding colours his/hers expression. Expression communicates with my emotions more effectively than words.

After the days in Porto we return to Lisbon, the capital not only of Portugal, but also of Fado. We spend the first night in a small Fado house in Alfama where the Lisbon fadista Ana Catarina Grilo performs. The connection with her is the result of a letter to a Portuguese association in Sweden asking for advice. Before we leave the Fado house that night Ana Catarina and the guitarrista Francisco Do Carmo invites us to come to another small Fado house the next day – Devagar Devagarinho. The experience at this small Fado house proves to be the best we have in Lisbon. The small group of about thirty guests, the four musicians and the fadistas share a small space that provides intimacy and a very dense atmosphere. As in Porto several of the fadistas also serve in the restaurant. Everything about the place and the experience is really “family like”, exactly like Francisco has told us.

In Lisbon we also visit a couple of big Fado houses, where some great and well known fadistas perform. The performances are of high quality but the venues sometimes lack the intimacy and the feeling of a shared experience. At those bigger places there are unfortunately sometimes also guests that are not aware of the special setting that the Fado experience requires. This is natural since you probably will find more tourists from other countries at those places.

My impression during our visit in Porto and Lisbon was that the proportions of male and female fadistas at the Fado houses are just about equal, and I feel that the emotional expression of the Fado fits both sexes equally well. As a matter of fact I find that the male Fado expression communicates a more sincere representation of genuine male emotions than the ones I have experienced in many other cultural expressions. I can in Fado find a home for my own emotions, not only as a “male guest” in the female representation of Fado, but also when members of my own sex interpret Fado.

In general, the strong emotions of Fado, and the common focus on the experience at the Fado houses, fit my personality and temperament very well. The emotions that the music creates are felt inside every Fado house guest, but those feelings are not expressed during the Fado song. We all know that we share the experience, but we do not devalue it by comments, chit chat or eating. But in the end of every Fado song we participate in an outburst of relief and joy – a joy we all feel, having played a part in the creation of the Fado experience.

Three concerts I did not attend

All in a merciful blend