We have recently been on our third fado expedition to Lisbon, the capitol not only of Portugal but also of fado.  We spent two of the nights at the famous Clube de Fado, and on March 28 we were lucky to enjoy beautiful fado by the fadistas Maria Emília, Maria Ana Bobone, Rodrigo Costa Félix and Joana Amandoeira, accompanied by Mário Pacheco, Pedro Pinhal and Paulo Paz. On April 3, we could again enjoy Maria Emília and Joana Amandoeira, but also Carlos Leitão and Carolina, accompanied by Henrique och Carlos Leitão. Two beautiful fado nights!

On the first night, I was happy to agree with Maria Ana Bobone to meet for an interview. Maria Ana sings fado beautifully, but her musicianship also includes some elements that make her a bit unusual in the world of fado. So in the morning of April 1 my wife and I met with Maria Ana at Centro Cultural de Belém for an interesting conversation over coffee. This is what we talked about. 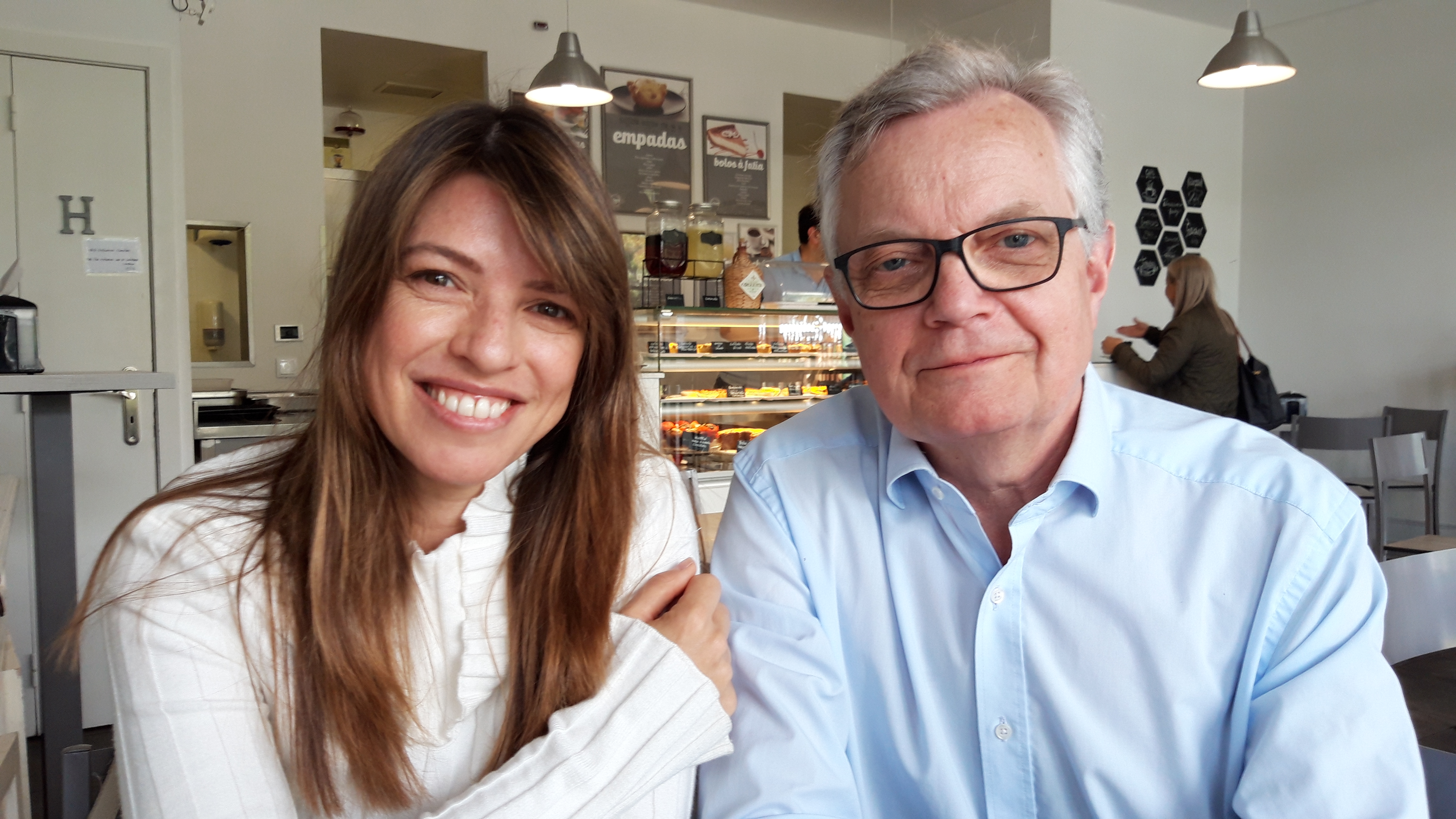 Maria Ana comes from a musical family sensitive to art and music, although her parents were not professional musicians. Her mother was a teacher and her father an engineer. But there was a lot of music in the family as well as in the extended family. Maria Ana was born in Porto, but since the family soon moved to Lisbon; this is where she grew up. The extended family often meets, which means that Maria Ana often visits Porto.

With the exception of a few years, Maria Ana’s school was an English private school. This means that she speaks excellent English. At the age of twelve, she started in the Conservatory in order to study piano alongside with the ordinary school. In sixth grade, she switched from piano to classical singing. Maria Ana started to sing fado at the age of 16, and continued with singing courses until she was 23.

Unsure whether singing would be her future she started to study public information and journalism. She laughingly calls it her “plan B”, so I suppose this was not her main option after all. But Maria Ana wants to have many options. She is not a planner in life, and assures us that too much planning bores her. Maybe journalism fitted into that frame. Being able to know a little bit of everything, kept many doors open. So, actually Maria Ana did not consciously aim for a music career. It happened anyway. She calls herself “a late bloomer”. 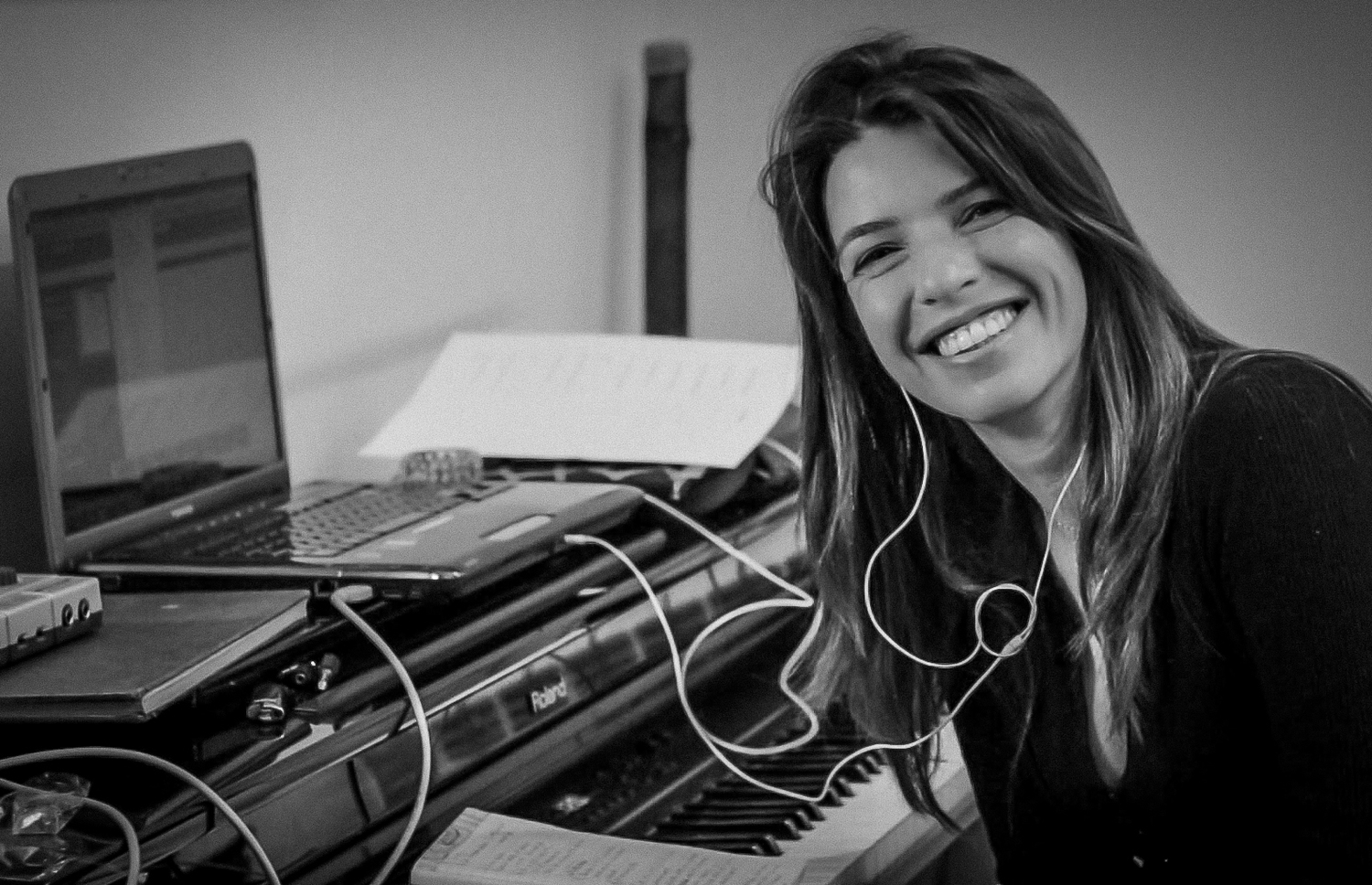 While writing this post I wonder if we sometimes unconsciously aim for a goal by moving into certain positions and options that will make the attainment of that goal more probable. It is not planning, but the effect can be the same – or even better. You avoid the boredom, the rigidity or the anxiety of conscious planning, but you might anyway get where you want. Some of that applies to me, but I do not know if it applies to Maria Ana. That is for her to say.

Without any doubt, Maria Ana Bobone now is a fadista, a well-established and much appreciated fado singer, but she makes a point of that she does not come from within the fado tradition. Her family background is Italian, Irish, German and Spanish. Her voice was in the beginning more Celtic, but she has practiced and worked with the fado expression since she was 16. 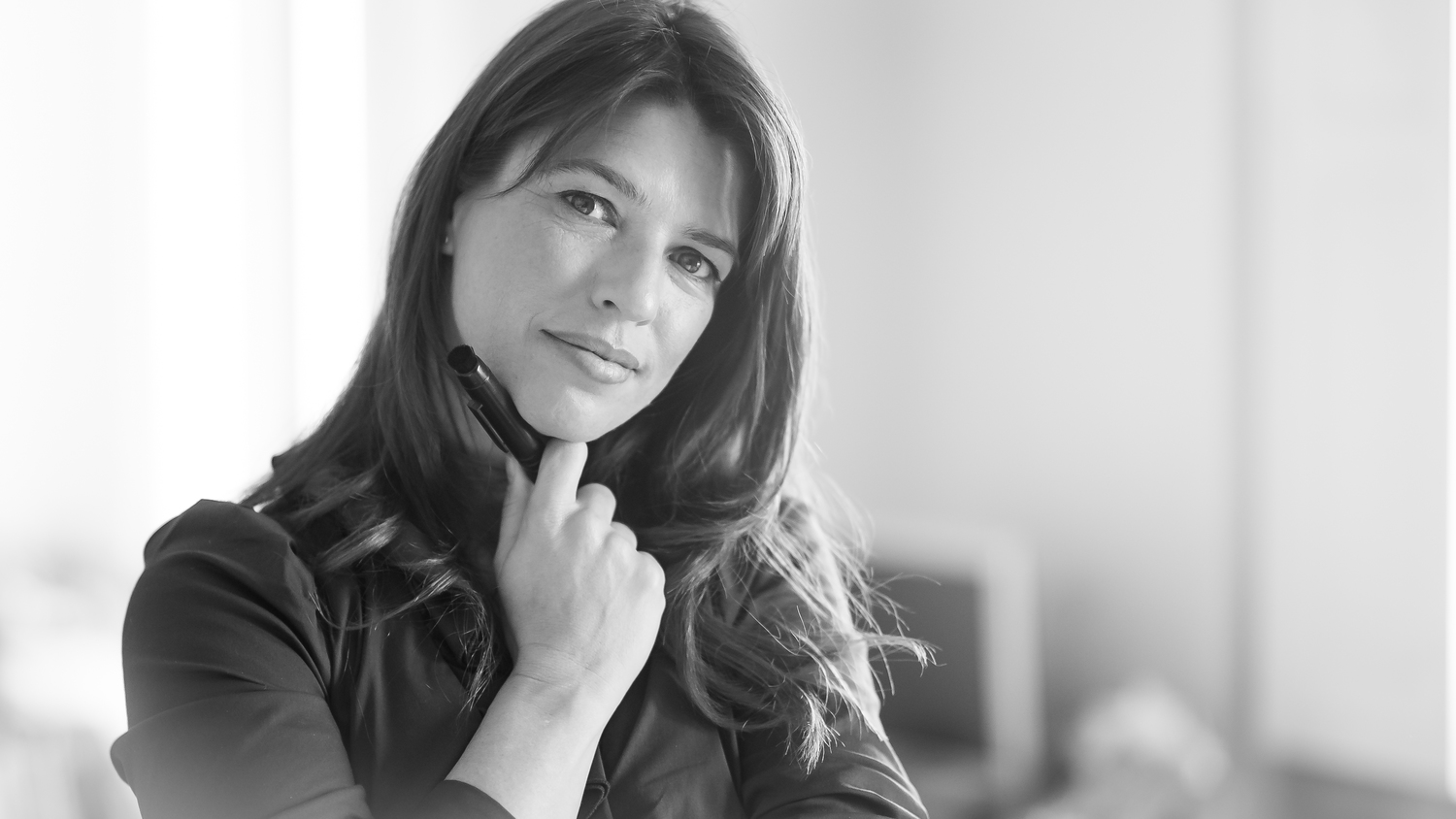 However, some are born in the tradition, and they learn from people close to them. There is a vocal characteristic that seems to run in the family, a kind of coloratura with ornaments. Others learn fado from the outside. There is almost like a genetic thing which marks the difference between coming from the inside or the outside, says Maria Ana. It is not that one or the other is better, but they are different. And the Portuguese listener can tell the difference.

From my perception of Maria Ana compared to fadistas with a more obvious origin in the fado tradition, I believe I can sense another difference. I hesitate to describe that difference with my own words, but maybe the difference has to do with treating the voice as a beautiful and clear instrument or telling a story with the voice as a theatrical instrument. If I am on the right track, I would still stress that it very much is a matter of emphasis, not of mutually exclusive categories. Exactly where on such a scale Maria Ana Bobone and other fadistas are positioned, I let others argue about. I very much enjoy the whole scale.

Anyhow, I can easily say that Maria Ana Bobone has a beautiful and carefully trained voice, and she uses it for beautiful singing. Often fado, but also other genres. More of that later. First, I want to mention something else that differs her from many other of today’s fadistas. As I mentioned, Maria Ana in early age started to play the piano, and she has later brought the piano into the fado. One of her albums is called Fado and Piano. This is in fact a re-introduction of piano into the fado tradition since piano was common in the end of the 19th century. Now the guitars by far are the most common instruments in fado – the Portuguese, the classical and sometimes a base guitar. 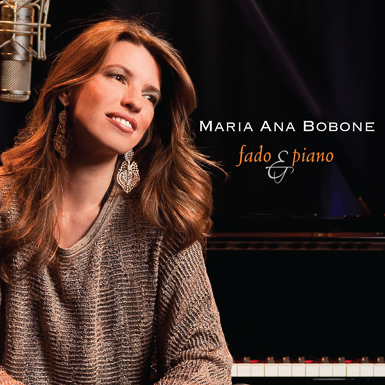 But new instruments are introduced, and Maria Ana Bobone is one of the fadistas who does that. Not only the piano, but also less expected instruments. In her album Luz Destino there is a harpsichord, and in the album Senhora da Lapa a saxophone. But, as Maria Ana points out, even Amalia Rodrigues experimented with the saxophone by Don Byas in 1973. 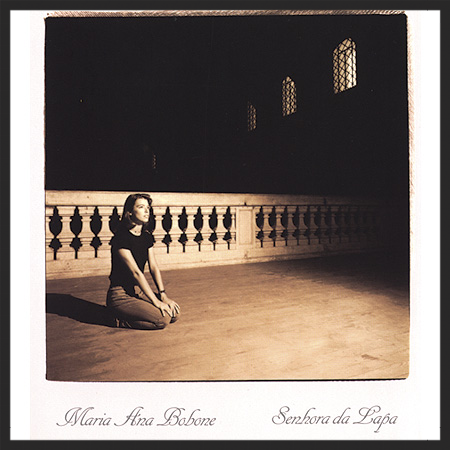 Most often fadistas do not accompany themselves on an instrument, but Maria Ana Bobone does. Often on a piano, and sometimes on a classical guitar. And the bass player Rodrigo Serrão, who often accompanies her, plays an upright bass, sometimes one with a futuristic design. So there are some things in Maria Ana Bobone’s performances and albums that differ from the kind of fado you most often experience in the fado houses of today. But it is beautiful and exciting music, sometimes with melody and/or lyrics by Maria Ana.

Although Maria Ana Bobone is a renowned fadista, not everything that she does is positioned in the centre of the fado tradition. With my northern European cultural background, I cannot be sure of the borders of fado, but I sense that some of Maria Ana Bobone’s music balances on borders to other genres. I appreciate music positioned in the centre of a loved genre, but it is also exciting to experience music on or close to the borders of a genre. It helps me to expand my musical habitats, and that is what Maria Ana Bobone does for me. 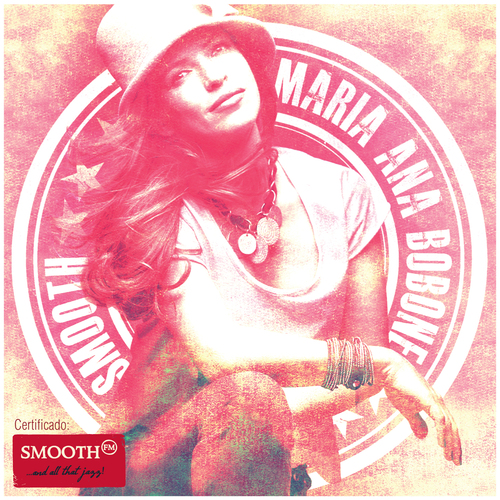 But Maria Ana has also recorded music far from fado. I am thinking of her album Smooth. Actually, I cannot see any relation at all to fado. The English title indicates instead that this album positions itself in the North American/North European culture sphere. When I saw that album for the first time, I got suspicious. I have experienced beautiful fadistas reduce themselves into much less significant singers, trying to interpret songs from the American tradition. They have not been able to compete with singers raised in that tradition, and they have not been able to bring interesting elements of fado into the American tradition. But Maria Ana Bobone is exceptional. She is in this album well in class with her most well-known American colleagues, and she has a part in most of the songs as composer and/or lyricist. My respect for this multi-talented artist continues to grow.

Can it be that Maria Ana still “keeps many doors open”? If so, I only hope that her audience will have the capacity to appreciate her capacity to vary between expressions. So far, the brilliant album Smooth does not have the attention it deserves, neither in Portugal nor in the US.

Maria Ana has lived almost all her life in Lisbon. She says that you do not have to be born in Lisbon to become a fadista, but eventually most fadistas with career ambitions move there. That is where most of the action around fado is. In Lisbon, there is a multitude of fado houses, and of course, more concert opportunities than in other places in Portugal. 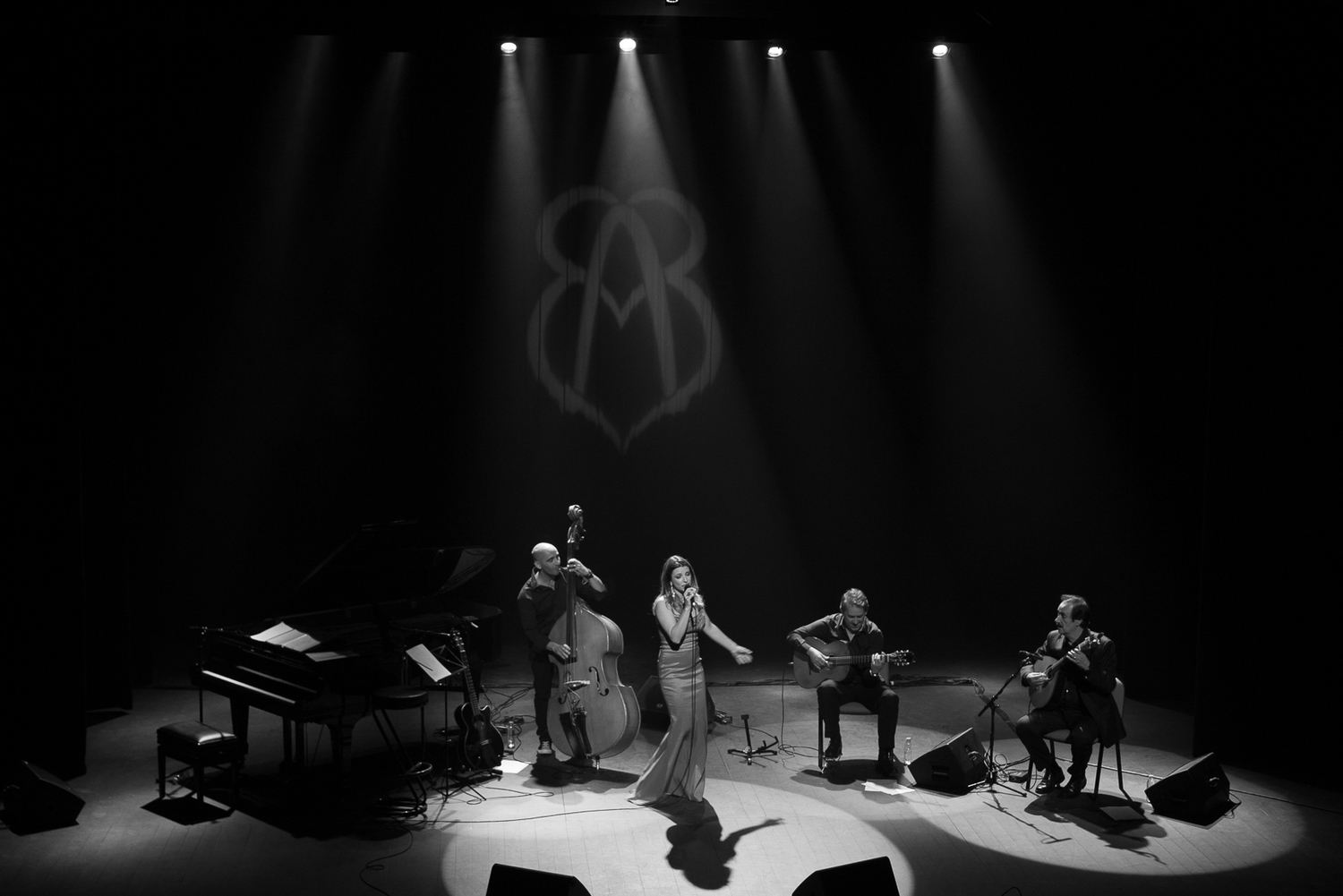 Which kind of venue does she prefer? They are different experiences, she says. Maria Ana likes the human contact without barriers and technique in a fado house or other small venue, but she also enjoys the show of a big concert, for instance in the great auditorium in Centro Cultural de Belém. She earlier used to sing in churches, which of course is a kind of venue suitable for her way of singing. Maria Ana has also performed internationally in different countries – in big concert halls and at small venues.

What is it to sing fado? Maria Ana gives us a rich answer: Fado is about communication, the sharing of emotions. You want to convey emotions to people, to make them join you, even if they do not understand the words. It is a type of communication without words. Still, the message of the poetry is important in building the emotion. You try to convince people that you feel what you sing. And in a way, you can actually feel what you sing through the means of your empathy. Words are powerful – and emotions of empathy are closer to you, the older you get. 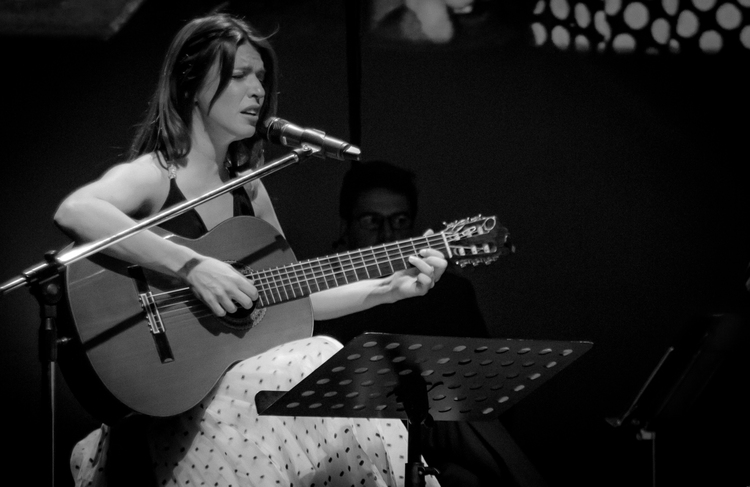 I agree with Maria Ana. Empathy and passion are two of the feelings that give depth to a fado experience – even if you only understand the emotional expression, not the language. Actually, I believe that is why you have to be quiet and concentrate on the performance in a fado house. If you think of something else your experience will be disturbed. And if you talk or eat during the performance, the fado experience will be ruined for everyone in the room.

The theme of maturity and empathy ends our fado discussion with Maria Ana, but we do not split just yet. We talk for a while about differences in the world, how climate in different regions influences culture, how nature provides different possibilities to find one’s dignity, and that different people consider different things essential.

However, not everything that is different is good. How can we know what is good and what is bad? What should we avoid? Maria Ana has given her children one role of thumb:

If it does not make sense to you, trust yourself and your thoughts.

That principle is of course not the only one you need in life, but maybe that rule of thumb can provide some sort of guidance to an open mind. An open mind like Maria Ana Bobone’s.

Here is a mix of songs from different times, venues and albums. Enjoy!