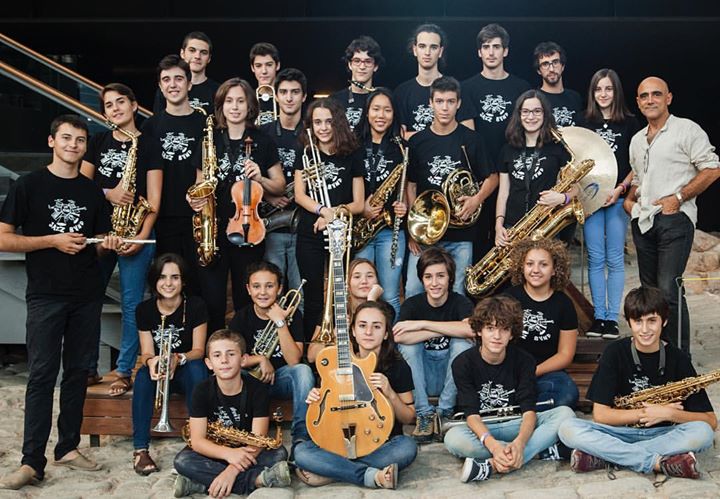 All around the world new generations of musicians emerge. Young people learn from earlier generations, from role models, from friends – and they also put a lot of effort themselves into developing their skills, of course.

A lot of good work is going on in schools on different levels, and today I want to shine the limelight on Sant Andreu Jazz Band in Barcelona, which is a project arising from a music class there. Conducted by Joan Chamorro, the big band brings together children between 6 and 18 years old, around a classic jazz repertoire with lots of swing.

Something exceptionally good has been going on with this band for quite some time, and I want you all to enjoy the fruits of their work. In fact they have a lot of good stuff on YouTube, which in itself is part of the success concept. They have made an effort of publishing a lot of clips with sound and picture of as high quality as the music itself.

In the band, students play together with teachers and other experienced and well-known musicians. This is a really good concept, and it mixes the educational side of playing together with having fun together. The latter goes for both students and experienced musicians, as you can see in the clips.

A very nice documentary about the band was made in 2012 by Ramón Tort. It is called Kids and Music, la Sant Andreu Jazz Band. I urge you to spend one hour to watch this film. You will enjoy a lot of good music, and what you see will make you very happy. Do not hesitate if you cannot understand the language. You will understand and appreciate the film anyway! The spoken word is not what is important. In 2013 the film was awarded best feature film at the Lights. Camera. Help. festival in Austin, Texas.

Some of the students have been put forward as soloists in other contexts than the big band. The charismatic founder and leader of Sant Andreu Jazz Band, Joan Chamorro, also runs the Joan Chamorro Quintet. The Quintet and the famous saxophone player Scott Hamilton play together with some of the featured students (or former students) in some of the clips below.

I love to see the way students pop up in different roles in the music. Sometimes you are the solo vocalist, like Rita Payés, Andrea Motis and Alba Armengou, sometimes you are in the background backing up your fellow musicians.

Enough of words. Enjoy the clips and the film below!

From This Moment On

How High the Moon